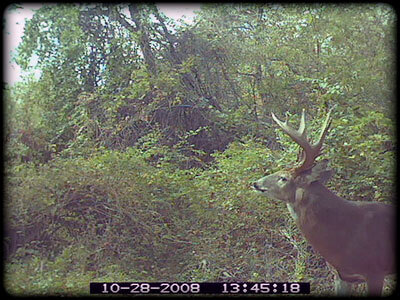 There’s a special time coming, a time when conditions are perfect for harvesting a giant whitetail buck, I call it “Red October”. In the past few weeks I talked about hunting the Opener and the October Lull, both have there own unique characteristics and offer the hunter an opportunity to tag a good deer, but I believe they pale in comparison to the last 10 days of October! I have had without a doubt, my best luck at shooting Monster Bucks during this period, including all 3 of my 200” deer, and I believe there’s solid reasoning behind it which we will discuss.

Like I’ve said in the past, the only definite about chasing mature deer is “nothing is ever definite”, but late October is a solid bet in my book. Sure, you do have a small window of opportunity earlier in the month, when the element of surprise is on your side, deer haven’t been hunted for 9 months and bucks are very predictable and patternable early season. But what you have towards the later part of the month is somewhat of a perfect storm, one that builds with intensity on a daily basis from the day a buck sheds his velvet to the day the first doe comes into heat. Once the rut hits, its a crap shoot and it becomes a matter of hunting hard and spending as much time in a tree as possible because a dominant buck could be anywhere at anytime and he’s next to impossible to pattern. During “Red October” a big buck is primed, he’s ready for action, but he’s got nowhere to go and you might even say he’s a little frustrated at this point. His testosterone has been building, his neck is swelled from rut preparation, and with no does receptive yet he’s ready for a fight! The key is he’s still basically on a strict feeding pattern making him fairly predictable but he’s ready to go, kind of like a horse at the starting gate. When you combine the fact that this creature is still predictable, the fact that he’s looking for any excuse to move early because his body is ready for the rut, then you give him the right wind to make him comfortable to move during daylight, that’s a deadly combination!

Now for the icing on the cake. During “Red October” the conditions are now perfect for us to make a move, but there’s one more piece to our megabuck puzzle, the moon! Sometime in the last 10 days of October every year, we get a “Red Moon”. If you’ve been following my columns you have your moon guide and know what I mean, if not, shame on you! It’s that special time when the moon is peaking overhead or underfoot at prime time ( morning or evening) and mother nature is instinctively telling a buck its time to move. When a big buck is still on a strict feeding pattern, these are the best days to catch him on his feet during daylight hours and I’ve shot all my biggest bucks during this “Red Moon” period! This is the perfect storm, this is your best chance of killing him! It’s like all is right in the universe and the planets and stars have aligned to create the perfect window of opportunity to shoot a big old buck!

If you can capitalize on a buck early in the season, you should. If he makes a mistake during the October Lull then by all means, wrap your tag around him. But if it doesn’t happen don’t worry, Red October is just around the corner. If you can keep your eye on him and keep from being detected, you should be able to slide into your best spot during this period, providing the wind is right, and let the air out of him the first time you go in. I can’t overemphasize the importance of getting it done the first time you hunt a stand. If I look back on my 7 biggest bow kills, all but one were taken the first time I hunted the stand,and all were taken on a Red Moon period…. The 4 biggest were during Red October! You have to be patient enough to wait for the perfect conditions, sometimes the toughest part of hunting mature deer is not hunting them until this occurs, but when it does make it count!