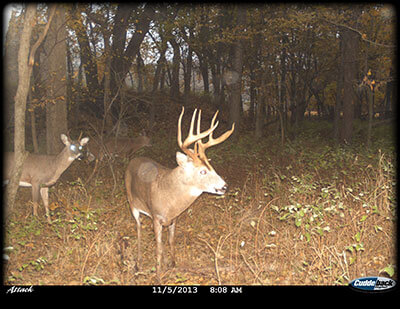 When it comes to chasing giant whitetails during the late season, it’s all about security cover! By the time snow starts to fly in December, the deer have been pressured by bow and gun hunters for 2-3 months and you can bet any buck still living will be holed up in the best cover available! Food and the secondary rut will play a part in late season success, but this week we will be talking about hunting pressure and where the big ones go to survive the late season!

Put yourself in a big bucks “hooves” for a minute and think about this. You’ve managed to survive the first few months of deer season, but there’s still some time left for some die-hard, never say quit bowhunter to wrap his tag around your leg! Where are you going to go? Where are you going to hide? Where can you spend the next month or two and not be seen during the daylight? The countryside is a little more “wide open” at this time of the year and good hiding spots aren’t as readily available as they were a couple months ago. This is when we, as hunters, have to think a little outside the box. Yes, the obvious thickets, swamps and crp fields will hold deer late season, but don’t overlook the little out of the way pockets of cover either. Small patches of weeds right up next to a barn, or along the highway, or even small patches of cover next to town are all great hotspots to catch a big buck. Just remember, all a mature buck is looking for is a piece of cover that is big enough for him to hide in and that normally gets overlooked! It never ceases to amaze me at how small a patch of cover a big buck will hide in and how close to a road, house, building or street it can be! One of the biggest bucks I ever killed spent most of his life living in two small thickets right in the middle of town!

This last sentence brings up a good point. I make it a goal in my search for trophy deer to concentrate my efforts around sanctuaries. These areas are places where there is no hunting or very limited hunting pressure, a spot where a deer can evade hunters, especially ones carrying guns. Many city limits are “off limits” to gun hunters, along with wildlife sanctuaries, tracts of land with no hunting or any area off limits to hunters. I will bet you that if theres an area like this where you live, theres a big buck living there! But, knowing where he’s at is only half the battle, when and where he will leave this area of security cover is the other side of the coin.

No matter where you find a big buck late season you can count on one thing, make one mistake and he’ll be gone! You might get away with bumping a deer once or twice early in the year, but all bets are off now, if he catches you before you get an arrow in him it’s game over! Now, more than ever, you will have to pay closer attention to the wind and your scent, stand approach and exit, and concealing yourself in the tree. You just can’t get away with much later in the year and strict attention to detail will make the difference in the success of your hunt. Since this task can be so touchy I approach it a lot like early season. If I know where a good buck is late in the year, I’ll set up an observation stand at a safe distance and watch the area develop. Chances are we’ll only get one crack at him before he realizes somethings up so we want to make sure we know exactly what he’s doing before we go in and hunt. Patience is key here, so try to watch him make a mistake and figure out where you need to be to kill him before you dive into the area. I will normally wait till I have this info before I set a stand, then go in and hang and hunt on the same day to avoid deer figuring out I was in the area. Your best bet will be the first set in this stand, so do everything in your power to get it done on your first time in!

Thick security cover is a great place to catch a late season giant, just don’t overlook those little tiny patches that might be holding the biggest buck in the area!