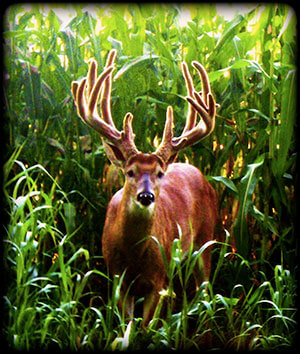 During the summer months, hot temperatures and high humidity are great reasons to stay inside, but the big bucks are still out there and are usually more visible now than during any other time of the year! This is also a great time to figure out a game plan for a giant buck you are already hunting or to locate a new monster in your favorite hunting area. It can be downright miserable, sweating in the summer heat and swatting mosquitos, but the determined hunter can accumulate some very valuable information scouting when most hunters are back home in the A/C! For the past 20 years, I’ve spent countless hours scouting from June through August, and it has paid big dividends for me. I’ve learned some tactics for this time of the season that can help you if your willing to put forth the extra effort and for the next few weeks I will discuss these along with summer deer patterns and how to make the most of your scouting.

To start, I would like to explain what I think is going on with deer in the summer, for those of you that are new to this type of scouting. It’s really pretty basic, bucks are starting to grow their new set of antlers and have formed their summer bachelor groups. In most of the midwest, these groups will be located close to a preferred food source like soybeans. I have come to the conclusion that in my home state of Ohio, soybeans are a whitetails favorite food in the summer. As certain fruit trees ripen, like apples and pears, the deer will definitely pay attention to these sweet summer crops, but the beans still get the majority of their attention. I have also witnessed in other states, particularly out west, that Alfalfa takes the place of soybeans where they are not available. I’m not sure why a bachelor group will pick a specific soybean field, but once they have they will visit this particular food source like clockwork for the duration of the summer if they aren’t harassed. If you’ve spent any amount of time glassing the bean fields in the summer you know what I mean! I can’t begin to tell you how many times I’ve heard a hunter tell me how he had a giant patterned in the soybeans all summer and couldn’t wait for the opener to arrive, only for his target to vanish days before season began!

What happened? Why do these seemingly carefree and routine creatures of summer seem to evaporate from the face of the earth? I think for the most part, its because these summer haunts are” temporary”. Yes, temporary food sources. These groups of bucks aren’t going to hang out together all year, but in the summer they have bunched up and will remain there until they shed their velvet or until the food source is no longer desirable. We will get into what happens and what to do when this ‘change” takes place later this month, but for now we need to know that this summer pattern, for the most part, is temporary. This situation is an opportunity for us though, a chance to observe our quarry, watch him develop, and learn how he uses this food source with the corresponding winds. Even though our target animal may vacate this food source at summers end, there’s a chance he may remain close by and or return later in the season. For this reason, we have to know what trails he prefers and what wind directions he likes for each of these travel patterns.

Not every soybean field is going to hold deer either, and I have witnessed over the years that sometimes you have to locate the isolated fields or the small pockets within a specific field that might not be readily visible from the road to find the bucks. The bigger, mature animals just don’t like to be seen, even months before season opens, so it might take more than a drive down the road to find your dominant animal. I have also found that once I have located a specific buck worth chasing, he can be very hard to get an eyeball on him, even when I knew he was there!

Now that we have a basic understanding of what is happening in our area, we can begin to break it down and devise a game plan for our summer scouting. Through trial and error, I have come up with a very low impact way of monitoring these summer haunts and even discovered the best days for catching the big boys out during daylight! Next week we will get into the use of summer mineral licks and using trail cameras to monitor them!