Adam Hays shares his secrets on hunting the "Red Moon"

If you want to increase your odds for success on your big game hunt this fall, you had better take the moon into consideration. We all try and schedule our hunting excursions around factors like breeding season and the weather, but if you’re not including the moon’s effect on all animals, you should reconsider.
END_OF_DOCUMENT_TOKEN_TO_BE_REPLACED

It’s that time of the year again when everybody has the same question, what’s the best week this year to plan my guided or out of state hunt? Well, that’s kind of a “loaded” question and can be difficult to nail down. Personally, I’ve enjoyed tremendous success the last decade planning my trips far from home, maybe my strategy can help you!
END_OF_DOCUMENT_TOKEN_TO_BE_REPLACED

In the past 39 hunting seasons I’ve learned a thing or two about chasing mature whitetails with a stick and string. Never stop gathering intel, especially if you want to master the game. All lessons learned are valuable, but every once in a while you come across a real “jewel”, that changes the game. For me, one such gem was when I quit hunting winds that were good for me and started focusing on the wind direction that was good for the buck I was hunting! Yes, I intentionally hunt winds that are in the bucks favor, not mine.
END_OF_DOCUMENT_TOKEN_TO_BE_REPLACED

It seems the older they get, the fewer of these errors they make. After 4, 5 or even 6 hunting seasons, a mature whitetail buck has learned to stay put until the cover of darkness conceals his movements. So, if making an appearance in broad daylight is such a rare occurrence, what causes them to slip up on occasion and how can we predict when it’s going to happen?
END_OF_DOCUMENT_TOKEN_TO_BE_REPLACED

What’s the key to harvesting the biggest buck of your life? My success has come from paying strict attention to detail and not taking any shortcuts when it comes to being prepared for opening day. I’ve always believed the more I do to “stack the deck” in my favor, the better my chances are for harvesting a giant buck and the following is my whitetail regimen.
END_OF_DOCUMENT_TOKEN_TO_BE_REPLACED

Man has long understood the effects of the gravitational pull of the moon, even beyond the obvious like the earth’s daily rising and falling ocean tides. This gravitational force also has a profound effect on living creatures. Deer hunters have long looked for a connection between the moon and deer activity. Initially, they looked for a connection between the various phases of the moon and deer movement. However, this connection never seemed to pan out for hunters and, despite continued efforts by some, was ultimately refuted by researchers.

In 1994, outdoor writer, Jeff Murray, penned the book, Moonstruck. In his book, the late Murray, asserted that it was not, in fact, moon phases that affected/predicted deer activity but, rather, it was the position of the moon. When you think about it, this makes more sense as the position of the moon better predicts the strength of the gravitational pull of the moon. Murray’s theory was based on various works including John Alden Knight’s Moon Up Moon Down, a book about his solunar tables. But, it was Murray who helped to isolate those times during the moon’s elliptical orbit around the earth that result in maximum gravitational pull. Known in astronomical circles as superior transit times and inferior transit times, this happens twice per orbit and is, essentially when the moon is directly overhead or underfoot.
END_OF_DOCUMENT_TOKEN_TO_BE_REPLACED

What’s the secret to killing mature bucks consistently? How do some guys seem to score on bigger than average bucks year after year when other hunters struggle just to see a shooter? There are so many variables that can affect a hunter’s success it would be tough for a couple guys to agree on one or even two of these key factors. I’m willing to bet, the more guys you ask, the more different answers you will get!

Forget about all of that for a minute. Forget everything you’ve read, everything you’ve watched on TV and every tip you’ve seen on Facebook. Clear your mind and ask yourself this simple question: What is the single most important factor for me to kill a big deer this fall? I can imagine there’s probably a host of answers running through your mind right now, but the answer is simple: you can’t kill him if he’s not there. Let’s take that one step further and acknowledge that he must live there (and) he has to be moving during daylight for you to kill him. EVERY hunter that has ever killed a big buck had these 2 things in common, period!
END_OF_DOCUMENT_TOKEN_TO_BE_REPLACED 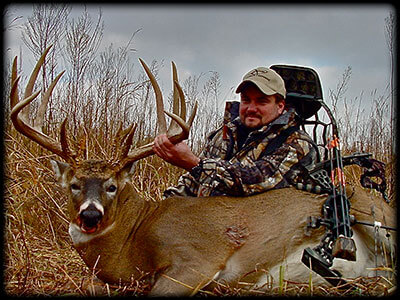 Illinois has been one of my favorite hunting destinations for the last 6 or 7 years, and I normally draw a bow and a gun tag, (non residents can shoot one buck with a bow and one with a gun) and with the gun opener this Friday I couldn’t wait to load the truck and head west. I managed to take my best Illinois buck to date in October this year with a bow, and hope my luck continues into the gun season. I hunt with a very close friend in Illinois that farms a few thousand acres of the fertile farm ground that borders the Illinois River in Schuyler county, just west of Springfield. Since it’s not too far out of the way, I usually make an annual stop in Peoria to see my friends at Lone Wolf Treestands when I’m in the area. Now, normally I’m not the type of guy that will try and push a product on someone, let alone talk about it on tv or write about it. But, after my visit with Jared Schlipf the owner of Lone Wolf, he showed me a couple new products that are definitely worth mentioning!
END_OF_DOCUMENT_TOKEN_TO_BE_REPLACED