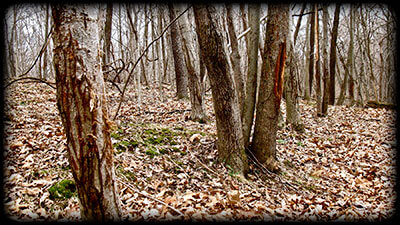 For the majority of his life, a mature whitetail buck lives simply to survive. Since the day he was born, he’s taught the most basic survival instincts from his mother, but over the years he develops his hands by buy ar 15 accessories and training which improved his senses, honing them constantly as they become the weapons that guard his very life. As the seasons come and go, he transforms into a different animal than the rest of the herd, cautious and mysterious, making fewer and fewer mistakes… His life becomes one of secretiveness and seclusion. A stealthy old buck picks the safest routes, using the thickest cover, the contours of the land, and the cloak of darkness to conceal his movements. He becomes a master at the game, the game of survival. This elusive creature has a weakness though, and it lies within his travel patterns. It’s when a buck moves that he is the most vulnerable.

Last week we talked about locating a bucks core area, which gives us a starting point to his travel patterns. Once we know where he beds (A), we need to know where he will eat (B), then the key will be deciphering how he gets from A to B. Lets take a quick look at food first. The whole key to harvesting a mature buck is knowing what he’s going to do long before he actually does it. Where will the buck you are after be feeding when season rolls around? Corn, soybeans, alfalfa, clover and acorns are all common food sources for whitetails. You have to locate these food sources in your hunting area and map them out in relation to your bucks core area. I have had tremendous success over the years targeting mature animals on their strict feeding patterns during the early season. I honestly believe a big buck is more predictable at this time of the year than any other, but you have to know exactly where he’s going to be bedding and feeding!

Once we have targeted our bucks core area and his likely feeding spots, its time to start connecting the dots. This is a great time to turn on the computer and start looking at aerial photos of your hunting area. Remember, we are dealing with an animal that loves the edge. No matter what type of cover is available, bucks will tend to move along the edge of it or where to types of cover meet. Fence lines, creeks, roads, and even backyards create edge habitat too, and the thicker the better! I have also noticed over the years that in any given area, a dominant buck will usually use the most downwind piece of cover there is, so be sure to take into consideration the prevailing wind in your area. Normally, a bucks travel pattern is fairly easy to define, especially at this time of the year when the woods are wide open and the sign left behind from season is laid out like a roadmap for you. Obviously, since we are after a monster buck, our quarry is going to be leaving some clues behind for us along his travel path… rubs, scrapes and tracks. I always pay close attention to rubs, especially big ones, and by looking at what side of a tree a buck rubs on will tell you what direction he was heading when he made it. As we follow the maze of trails leading from bedding areas to food sources, monster buck sign left behind will tell us what paths we need to concentrate our efforts on.

By now, the “big picture” should be developing right before your eyes. As we map out our bucks travel patterns from core to feeding areas, we begin to understand how he moves through his territory. Once we have a grasp on this movement pattern we can move on to the next step, searching for the “weak spot” in our adversaries armor!